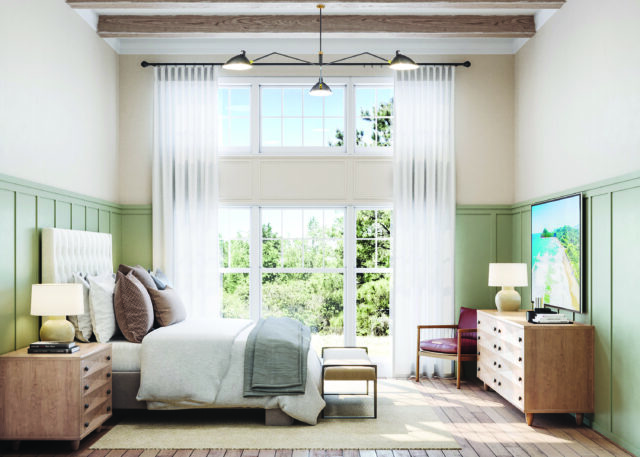 As the legendary Stanford White’s storied life recedes further into American myth, his architectural design remains relevant for houses on Long Island’s East End, and a draw to buyers, from stately village homes in Southampton to the Montauk Association Historic District Houses. Known for his shingled mansions designed at McKim, Mead & White for industrialists and moguls of a bygone era, his allure mixes turn-of-the-20th-century romance and urban flair with practicality. The Latch Southampton Village, a condo community in development by Beechwood Homes, features two houses said to be of his provenance. Key to the property’s ambiance, a gateway to its central drive, is the iconic main Latch building and adjacent Terry Cottage, the jewel in Latch’s studded crown. The historic structures evoke the Federal Revival period, clad in cedar shingles, then painted white, with Dutch Colonial touches and Southampton’s distinct vibe.

In 2016, Beechwood Homes acquired the property, the site of the former annex to the famed Irving hotel with its own storied past featuring a who’s who of rock, film, and political stars. The buildings’ bones were dilapidated, pointed out Steven Dubb, principal of the Beechwood Organization, a company founded by his father, Michael Dubb. Sparing no expense, Beechwood hired James McMullan of Fleetwood & McMullan and Jason Poremba of Jason Thomas Architect for the restoration. The team created interior and exterior floor plans, retaining footprints and restoring façades to their original grandeur, maintaining the Southampton look and vibe. They divided one structure, the main Latch building, into a pair of townhomes; altogether the community is comprised of one single-family home, and 19 luxury villas and townhomes, a clubhouse and pool. On a recent tour of the property during construction, Dubb maintained that his customers did not want homes that are cookie-cutter copies while showing customized built-ins, balustrades, marble bathrooms, dramatic staircases and white-oak floors. One home has a cathedral ceiling and balcony. Buyers choose elevators or not, and fireplaces, wood-burning or gas; some of the homes are equipped with outdoor fireplaces.

The Latch follows the trend to preserve what is special about the Hamptons, joining a wave of development that includes Sag Harbor’s Bulova Watchcase Factory, conveniently a stone’s throw from town to beach. “We’re excited for the future, bringing forward the best of the past, and creating the highest-quality new condominium homes to be found in the Hamptons today,” said Dubb, who had also led the work on nearby Bishops Pond. You could see his pride; as in White’s efforts, each dwelling is a labor of love. “This is my baby,” he said. “It’s a good baby to have.” He expects the first occupancy for the summer season. beechwoodhomes.com/latch

Regina Weinreich, a frequent contributor to Purist, is the author of Kerouac’s Spontaneous Poetics and co-producer/director of Paul Bowles: The Complete Outsider.