After the Obey Creek development failed to find retailers to fill its mixed-use project, a new development may be slated to take its place. The South Creek development is proposing more than six hundred townhomes and condos in the space across from Southern Village.

The South Creek development by the New York based developer Beechwood Organization is proposing 650 units of housing on 40 acres of land with an additional 80 acres preserved for greenspace. The space will also be accompanied by 42,000 square feet of commercial and retail space. 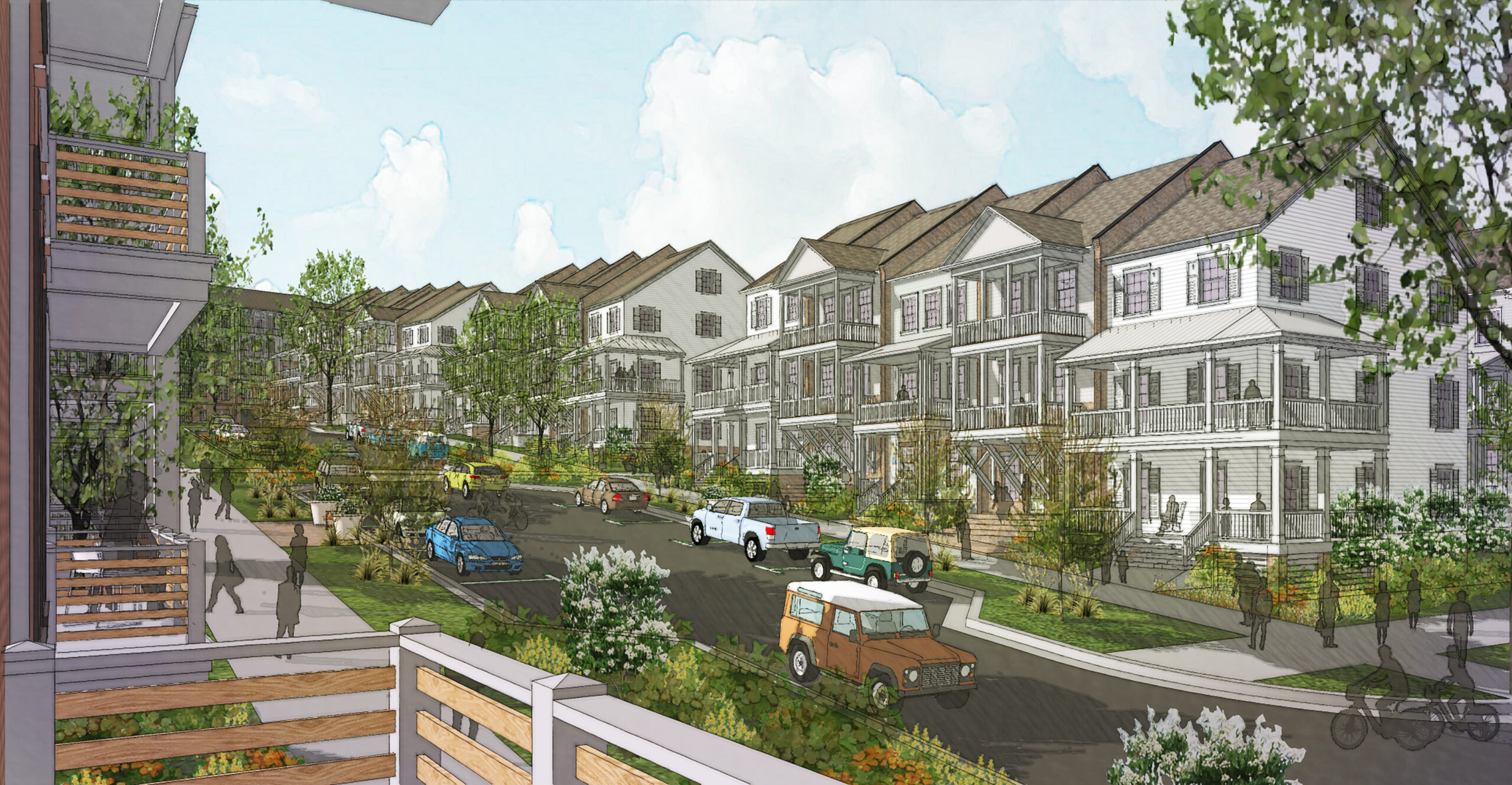 A rendering of the townhomes proposed by the developer. Early concept plans of South Creek plan for 103 townhomes and 546 condos (Photo via Beechwood Organization).

The project aims to fill in the “missing middle” housing gap in Chapel Hill with a mix of townhomes and condos. Housing consultants have told the town it needs to grow by roughly 485 homes each year to meet the rising demand.

Following years of negotiations and approval by the town, East West Partners, the original developers of Obey Creek, said their mixed-use project would not be built because demand for office and retail space has decreased since its original approval in 2015.

Earlier this month the Chapel Hill Community Design Commission reviewed concept plans of the project. While no formal action was taken at the meeting, the commission provided the developer with feedback before they submit the final application to the town.

John Oxenfeld is the primary architect on the project. He said the design for South Creek was based on the culture of Chapel Hill.

“It’s really influenced by our vision for what South Creek is, which is deeply influenced by the areas agrarian roots, the natural landscape, the dynamic community, the proximity to the hospital and the university,” Oxenfeld said. “It’s our goal to make a place that celebrates all these unique qualities.”

Beechwood’s concept plan show three-story townhouses and four- to seven-story condo buildings. Shorter buildings would be near the highway, with taller buildings further down the hill. Oxenfeld said the goal was to create seamless interactions between the site and Wilson Creek, which is adjacent to the property. 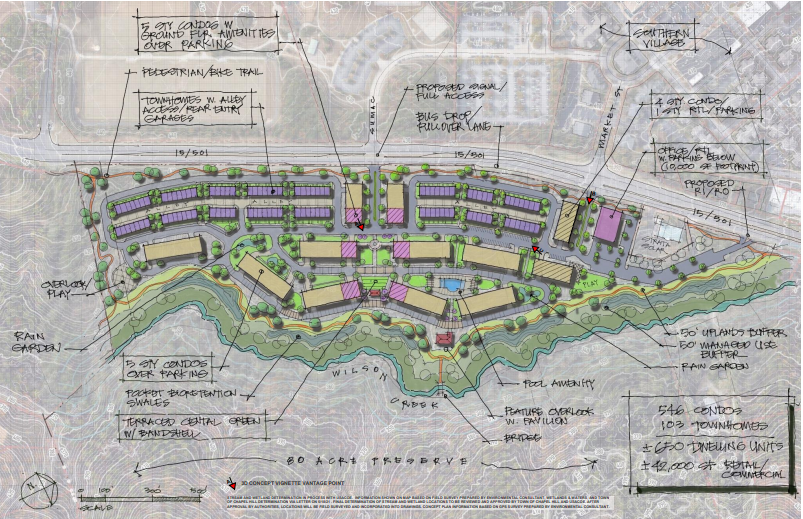 Concept plans for South Creek show 40 acres for housing and 80 acres preserved for greenspace. The buildings range from three to seven stories depending on topography (Photo via Beechwood Organization).

The site is also adjacent to the U.S. 15-501 South highway. Lee Bowman, the development consultant on the project, said he believes this is an important project because of its proximity to Southern Village.

“We understand, and don’t take lightly, this opportunity we have,” Bowman said. “This is the gateway from the southern side of Chapel Hill into town. As we are looking at that concept, it has been in our mind as well as how traffic interacts with the project site.”

Before that gateway can be created, however, the design commission is calling for improved pedestrian safety so people can safely cross the highway. Commission member Susan Lyons said the current plans do not accommodate residents who want to walk across the street to Southern Village for shopping or recreation because of the existing highway.

“The transition to 15-501, which is a highway,” Lyons said. “It’s an interstate highway, and I think recognizing we have houses facing that is going to be significant.” 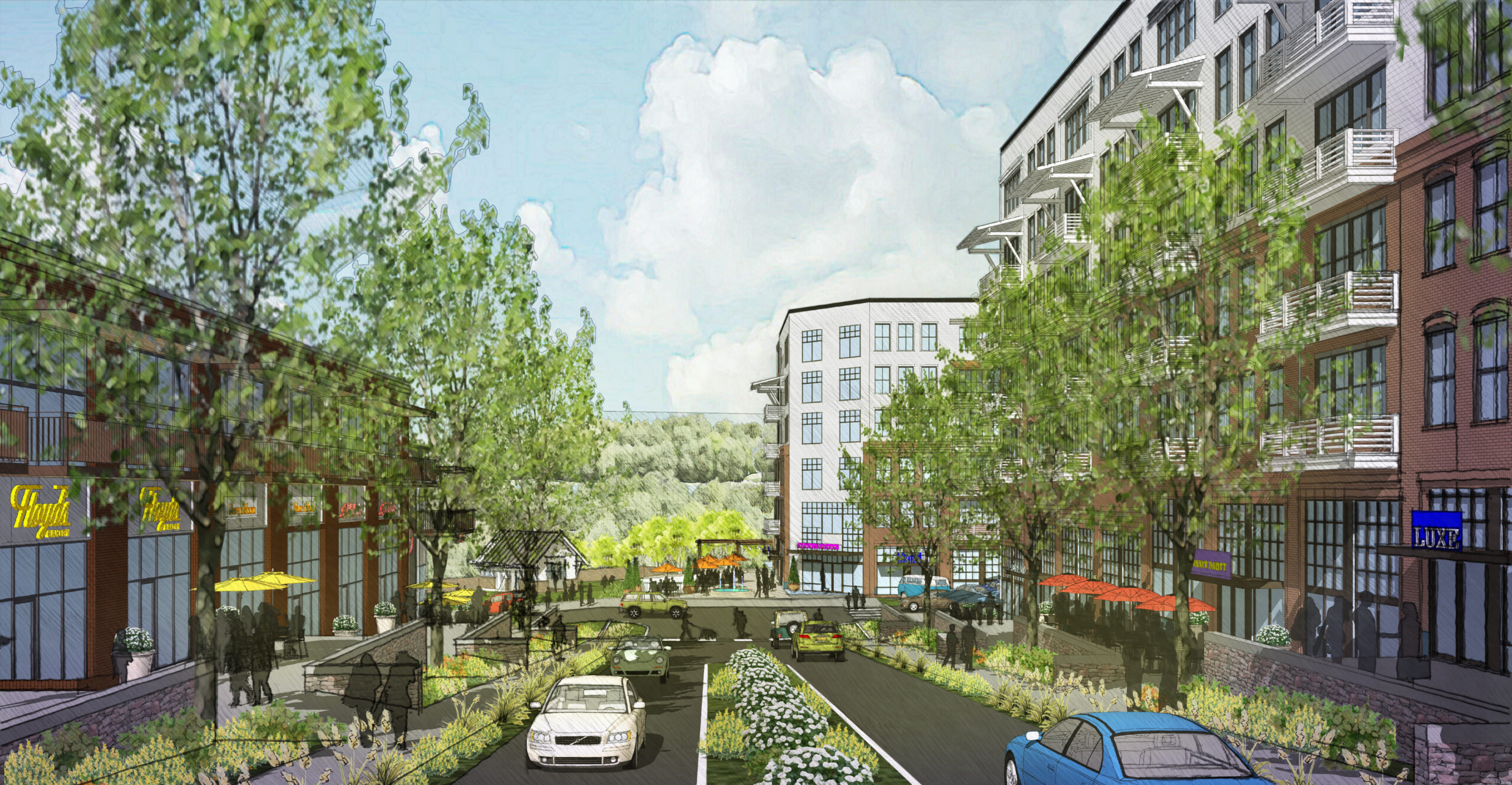 A rendering of the proposed retail in South Creek. Concept plans say there will be about 42,000 square feet of commercial and retail space on the site across from Southern Village (Photo via Beechwood Organization).

Lyons said it would be a shame to have this new development force people to get in their cars to cross the street. She also said she was concerned about the price of the buildings.

“I have a hard time seeing how you’re going to meet a price point that leaves this in the missing middle,” Lyons said.  “With the materials that you have, the grading issues and the quality and look of those buildings. I hope you can because this is what a project should look like.”

Despite these concerns, Bowman said he and the Beechwood team remain committed to providing multifamily housing in a walkable community.

“Our goal with all of our housing here is to hit that missing middle within the town and frankly, the nation at large for the need for more middle market housing,” Bowman said. “The ability to leverage the BRT, and UNC hospitals, and the university only a mile or two away, we really envision a transit-friendly development that can provide quick, non-car commutes up to those job centers at UNC and the hospitals.”

The concept plans will go through revisions and town staff before being voted on by the Chapel Hill Town Council. The council would have to terminate the Obey Creek development agreement before negotiating a new permit for Beechwood.